I first heard that a Treaty #4 Medal was about to be auctioned off on September 14th, 2014, after reading a Facebook Status posted by an artist friend of mine, Ray McCallum. In the post Ray stated that he and his wife Paula Acoose had intentions of going to Ontario to bid on the Medal. Through out the week I followed Ray’s Facebook page with great interest and was elated to read that he and Paula had in deed made their way to London, Ontario to the Jeffery Hoare Auction House. 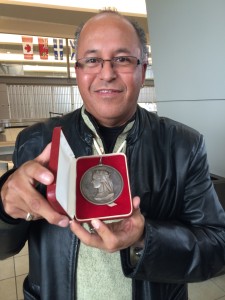 For those of you from my generation who have very little understanding of the Treaties, because treaties were not taught in school, I will share this bit of information. Treaty #4 was one of 11 numbered Treaties signed between First Nations and the Crown (Queen of England), Treaty #4 was signed on September 15th, 1874. Upon signing the Treaties, silver medals were bestowed on the Chiefs who represented their people at the negotiation table. There were 12 original Chiefs who signed with Chief Piapot signing an adhesion to the Treaty a year later. There were 21 medals that were handed out, 20 are still unaccounted for.

Ray and Paula’s journey began during the week of the annual Treaty #4 Gathering that is held in Fort Qu’Appelle, which ironically is Ray’s home town, Paula is a member of Sakimay First Nation which resides in the heart of Treaty Four Territory. So it comes as no surprise that they would feel an affinity for the Treaty #4 Medal, they obviously felt they had a vested interest in acquiring the medal.

Ray and Paula were not the only ones from Saskatchewan interested in the Medal. Alvin Francis, a Councillor from Neekaneet First Nation and the town of Maple Creek had also heard about the auction and began to initiate an effort to make it to the auction. Maple Creek’s Manager of Community & Economic Development Main Street Program Coordinator, Royce Pettyjohn had found the medal after months of research. It was Royce who informed Neekaneet First Nation of the discovery and wanted to join forces to try and purchase the medal for the town of Maple Creek.

In the end the Maple Creek contingency understanding that Ray and Paula had every intention of returning the medal to the people of Treaty #4 and were in a position financially to make a strong bid for the medal, decided to support them in their efforts.

On September 20th, 2014, Ray McCallum and Paula Acoose successfully won the bid to possess the Treaty #4 Medal. On September 29th, 2014, Wendy Hoare personally delivered the Medal to all of us who greeted her at the Regina International Airport.

Although I had first heard of the newly found Treaty #4 Medal very recently and I am grateful to Ray and Paula for all they have sacrificed to obtain it, my family and I have a vested interest in the medal as well. I have been hearing about the Treaties and in particular Treaty #4 for most of my life.

On September 15th, 1874 our Great Grandfather was one of the Chiefs who signed Treaty #4 on behalf of his people. His name was kâ-nêwonaskasêhtêw (He Walks On Four Claws), on the treaty document his name appears as KA-NE-ON-US-KA-TEW,

It was with great honor, respect and hope that I was given the pleasure of holding the Treaty #4 medal when it arrived on Treaty #4 soil.

In my mind all I could think of was that I might be holding the very medal my ancestor held in his hand on that momentous day over a hundred years earlier.

A memory I will keep with me for the rest of my life.

Thank You Ray and Paula for all that you have done.

Since I was a child I have always been fascinated with stories. I remember going to the old Met Theatre on 11th & Broad St. to watch a double bill, Boris Karloff’s “Frankenstein” and “The Wolfman”, I was terrified but I loved that theatre. The old Capitol Theatre was another venue I enjoyed.  On television, I enjoyed watching Cecile B. De Mille’s films, Samson & Delilah, the Ten Commandments of course and Ben Hur, they were grand spectacles another favourite I saw at the Roxy theatre was Jules Verne’s “20,000 Leagues Beneath The Sea”.

A few years later I would spend an entire day watching Bruce Lee movies when I lived in Winnipeg from 1970-1975, back then you didn’t have to leave the theatre except when they were cleaned between showings. I can’t even tell you how many times I saw “Enter The Dragon”.  It wasn’t just movies, it was books too. I loved to read back then and I still do to this day. 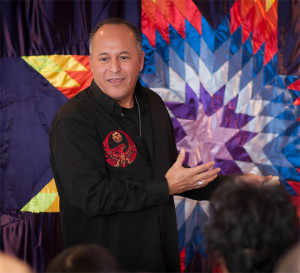 In 1973 I met W.O. Mitchell, he was a guest lecturer for a week at our school for our English class.  Mr. Mitchell shared with me a secret to writing prose, which I still use. He asked me to close my eyes and write whatever I saw with my minds eye, “Don’t worry about where the words land on the page”.  After 5 minutes I opened my eyes and he told me to grab another piece of paper and find the story in the scrambled words. Prior to this exercise I used to try and rhyme my poems, I never tried rhyming again.

I continued to write through out high school and added Chinese philosophers and prophets to my selections, which added a whole new dimension to the prose that I wrote.  In 1981 I started my training in Journalism and electronic media, learning to make films myself and produce radio shows. Since then I have travelled across Canada hearing and recording stories of all kinds.  In 1983 the video crew worked with “Little Red Hen Theatre Group” led by Marla Dufour, to produce a series of Wasakechak (Trickster) stories using shadow puppets. It aired on CBC Regina.

Through the years I have been gifted with stories by some of the storytellers I had met in my travels and every now and then I share them when I am asked too.  Prior to receiving my first story in a semi-formal way, I had never considered myself a “Traditional Storyteller” I was just repeating things I had heard.

In the 80’s I was fortunate enough to meet and hear some wonderful storytellers, Winston Wuttunee, George Tuccaro, Maria Campbell, Joe Charles and Richard Wagamese.  Joe Charles was from Laronge and he was a keeper of many Wasakechak stories. Joe could entertain you from sun up to sundown or in our case sundown to sunup.  Back then we were usually in the midst of a celebratory state and it was a wonderful way to pass the time. In fact we lost all sense of time being entranced in Joe’s incredible ability to spin a yarn.  Winston and George used music to tell their stories, they were consummate performers and I was fortunate enough to share the stage with them as co-emcees of the Back to Batoche Days.

Maria Campbell is a matriarch in the Métis community, her roots go back to Gabriel Dumont and in fact she still maintains a home at Gabriel’s Crossing near Batoche.  She is a Métis historian and award winning Author, who’s book “Halfbreed” is required reading at a number of high schools and Universities across the nation.  I am honoured to call her my friend and I was blessed to have been able to sit with her and her now deceased husband Shannon Two Feathers on numerous occasions to listen to them reminisce.

For a year and a half Rick Wagamese and I produced a weekly radio show called “Wehta Matowin” Radio for the Saskatchewan Native Communications Corporation.  It was a news, information and music program that we researched, wrote and produced from our recording studio on 11th Avenue and McIntyre St.  The show was delivered on reel to reel to the CBC Broadcast Centre where it was then broadcast through Keeweetin Country in LaRonge at what is now known as Missinippi Radio as well as CJUS –University of Saskatchewan in Saskatoon.

Richard is an incredible writer, he has a wonderful voice for radio and if you ever get to listen to him live you will see an amazing example of how he transforms into his characters and brings them to life, it’s like watching a one man play.  Richard has gone on to become an Award winning novelist with 14 books to his credit and more to come. We are planning a reunion of sorts in the not too distant future and I am looking forward to the experience.

My point to all of this is that a true storyteller draws on his life experiences and weaves them into tales of mystery and intrigue, not by the mere subject but through the telling. It is the responsibility of the teller to introduce himself, where he comes from and acknowledge where the story came from as well.

True Indigenous Storytellers earn the right to tell a story and they do it from memory, they are not written down, they are nurtured in the mind and delivered from the heart.  Part of earning a story is offering a gift to the one who gave you the story, usually that gift consisted of tobacco and whatever you felt was a good trade. Stories have a spirit of their own and the storyteller is just a vessel for that spirit.

The stories were this protocol would be acknowledged include; Creation stories, Raven Stories, Wasakechak (Trickster) or Coyote stories, and Ceremonial stories, sometimes they are one and the same. Many of these stories would only be told in the winter season because of the characters that are called out during the telling.

For many years, our stories went underground because of the oppressive policies that governed the people under the Indian Act. Resurgence of the stories has begun and the stories are being celebrated at events across Turtle Island.

Sâkêwêwak Artists’ Collective will be presenting their Annual Storytellers Festival February, 2015 were a fine collection of contemporary and traditional Indigenous Storytellers can be seen and heard.